Contrary to popular belief, Chinese five spice is not named after the five spices it contains. Instead, it takes it name from the five elements: Earth, Water, Fire, Air and Ether. Also know as the ‘Wonder Powder’, five spice utilises three of the six Ayurveda tastes flavours: sweet, bitter and pungent. (The Ayurvedic taste flavours salty, sour and astringent, are not included). The addition of five spice helps to optimise flavours and digestion, preventing any discomfort after eating. It also imparts the nutritional benefits of the spices it contains. 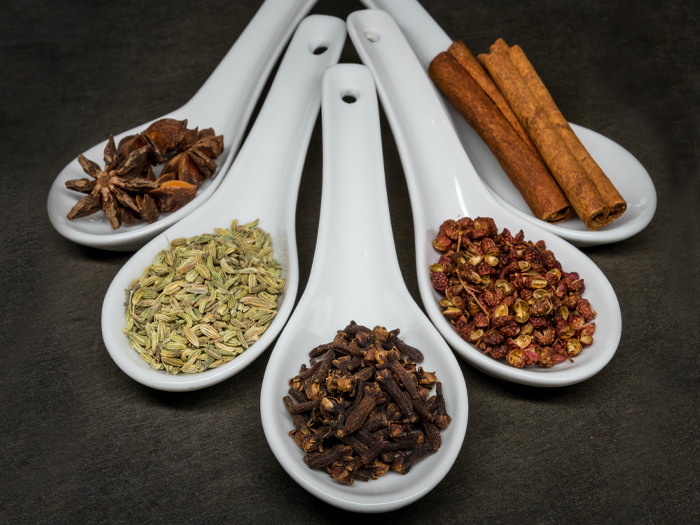 The pungent taste is promoted through stimulatory components, such as capsaicin in chilli peppers. This creates a feeling of heat which helps to boost the digestive system. Szechuan pepper is also a rich source of vitamins, such as vitamin A, carotenes, and pyridoxine, as well as minerals like potassium, copper, and iron, a vital substance in haemoglobin that carries the oxygen within red blood vessels.

The sweet taste nourishes components of the body that are usually high in minerals. It is anabolic in action (meaning it influences muscle and tissue gain) and promotes both enzyme and pancreatic activity. Cinnamon contains antioxidants with anti-inflammatory effects, helping to lower your risk of disease. Its properties can also reduce blood sugar levels, as well as a mimic insulin for a powerful anti-diabetic effect.

Fennel seeds, meanwhile, have a rich antioxidant content strengthening the immune system. This includes potassium, folate, vitamin C and vitamin B-6. With its significant amount of fibre and lack of cholesterol, fennel also helps reduce the risk of heart disease.

Star anise provides essential minerals like iron, manganese and calcium. Some studies suggest star anise is high in antioxidants, helping prevent chronic disease by reducing inflammation. The main compound in Star Anise is Shikimic acid which was used in the production of the drug Tamiflu (also called Oseltamivir), used to produce an antiviral medicine against Bird Flu or H5N1.

Cinnamon also contains a pungent taste, which makes it excellent for pacifying Vata.

Fennel contains a bitter and pungent tastes too, which makes is excellent for pacifying Vata and Pitta.

The bitter taste promotes bile secretion, critical for the digestion and absorption of both fats and fat-soluble vitamins. Research has even found it helps prevent cancer through high isothiocyanate.

Meanwhile, cloves boast antioxidant, antiseptic and anti-inflammatory benefits. It provides high levels of vitamin A and is also know to improve digestion through boosting the production of digestive enzymes.

Cloves also dominate in the pungent taste and can be very heating, so they are best for pacifying Vata and Kapha.

If you want a recipe which utilises five spice, look no further than my Chinese Five Spice Noodles.

For this recipe, I wanted to give the tofu a gentle touch; therefore, I substituted cloves for turmeric. While turmeric is bitter, it is less pungent and helps to balance the rest of the spice blend. I also used regular ground black pepper in place of Szechuan pepper.

Click the link to read the recipe for yourself: https://eatandbreathe.com/5-spice-noodles-recipe/

Leave your details to be kept up to date regularly

We use cookies on our website to give you the most relevant experience by remembering your preferences and repeat visits. By clicking “Accept”, you consent to the use of ALL the cookies.
Cookie settingsACCEPT
Manage consent

This website uses cookies to improve your experience while you navigate through the website. Out of these, the cookies that are categorized as necessary are stored on your browser as they are essential for the working of basic functionalities of the website. We also use third-party cookies that help us analyze and understand how you use this website. These cookies will be stored in your browser only with your consent. You also have the option to opt-out of these cookies. But opting out of some of these cookies may affect your browsing experience.
Necessary Always Enabled
Necessary cookies are absolutely essential for the website to function properly. These cookies ensure basic functionalities and security features of the website, anonymously.
Functional
Functional cookies help to perform certain functionalities like sharing the content of the website on social media platforms, collect feedbacks, and other third-party features.
Performance
Performance cookies are used to understand and analyze the key performance indexes of the website which helps in delivering a better user experience for the visitors.
Analytics
Analytical cookies are used to understand how visitors interact with the website. These cookies help provide information on metrics the number of visitors, bounce rate, traffic source, etc.
Advertisement
Advertisement cookies are used to provide visitors with relevant ads and marketing campaigns. These cookies track visitors across websites and collect information to provide customized ads.
Others
Other uncategorized cookies are those that are being analyzed and have not been classified into a category as yet.
SAVE & ACCEPT

BE ONE OF THE FIRST TO KNOW

Want to be kept up to date with the latest workshops, blogs and everything else Eat & Breathe related?

You can by signing up here